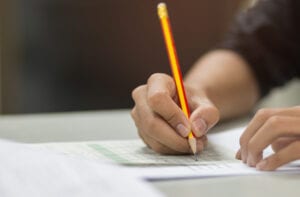 Are college entrance exams really getting kicked to the curb, tossed out, rendered obsolete, “retired?” Word on the street, in academic corridors and across the nation’s college campuses, suggest a definitely maybe.

“There are now well over 1,000 colleges and universities that don’t require SAT or ACT scores in deciding whom to admit,” according to Claudio Sanchez’s NPR article, “Study: Colleges That Ditch The SAT And ACT Can Enhance Diversity.”

And according to some, for good reason.

The National Association of College Admission Counseling’s (NACAC) comprehensive 2018 study, “Defining Access: How Test Optional Works,”  details the effects of Test Optional Policies (TOP) in 28 public and private universities across the United States, most of which are positive, particularly in the areas of increasing diversity and inclusion of underrepresented students.

Ultimately, the authors concluded that the most significant determinant of college success is previously achieved success in high school.

“…our data indicated that high school GPA had a stronger correlation with college success for Non-Submitters than the ACT/SAT (for the 27% of Non-Submitters for whom we had test scores) — both in terms of college cumulative GPA and graduation rate. “

Students who lack resources and funding for private test prep are clearly at a disadvantage with respect to performing well on the SAT. Wealthier affluent families can buy quality test prep services, which generally help raise a student’s score anywhere from 50-150 points. As Slate’s article, “Does SAT Prep Actually Work?,” acknowledges, private test prep does work, but to the advantage of those who can afford it.

“Critics of standardized testing cite this supposed coaching effect—and the unequal access to its benefits—as a major reason the system tilts in favor of the richest kids and should be reformed.”

So, if standardized testing favors students of means, then Test Optional Policies seem to even the playing field for students who depend on their public school and community resources for educational services.

Nonetheless, SAT or ACT scores are not obsolete.

For instance, most Test Optional Colleges, while embracing a more diverse student body of applicants, should clarify that many financial aid institutions still require test scores.

For her 2009 investigation, “The Other Side of ‘Test Optional,’” New York Times journalist, Lynn O’Shaughnessy, contacted 37 liberal arts Test Optional colleges and discovered that eight required an SAT or ACT score to qualify for a merit based scholarship. Ironically, many of socio-economically disadvantaged students that may be accepted to one such university without a test score, will need that vey score to afford attending.

Test Optional May Be A Marketing Scheme

Campuses advertising that they are now Test Optional will most assuredly result in an increase of college applications, and potentially rejection letters, which will balloon a university’s “selectivity ranking.”

Jonathan P. Epstein, a senior consultant at Maguire Associates specializing in enrollment and admissions, emphasizes that such a “recruitment boost” spares these universities hundreds of thousands of marketing dollars. Students who previously believed they wouldn’t be accepted to a university based on their test scores alone will likely apply in droves.

In addition, students who don’t submit test scores usually withhold scores because their scores are lower than those who do submit scores, which allows Test Optional colleges to claim a higher “average” SAT and ACT score, thereby making these schools appear to be more selective when in fact they may not be.

As Hechinger Report’s Stephen Burd indicates in his column, “The Real Reason Colleges Go ‘Test Optional’”, many Test Optional colleges may not really be invested in TOP to facilitate diversity, but to artificially inflate their university’s  ranking.

“…by going test-optional, schools can artificially inflate the average SAT and ACT scores that they report to magazines that rank colleges, such as U.S. News & World Report. That’s because under these policies, the only students who tend to send in their scores are those who have done well on the tests.”

The College Board, the maker of the SAT, insists that “research consistently finds the SAT to be a valid and reliable predictor of college outcomes, including grade point average, retention, and completion.”

It is worth noting that the rigor of every high school is not the same, which renders GPA alone to be an unreliable lone indicator of college achievement.

On the other hand, the college board overlooks the reality that many students cannot afford quality test prep services to significantly improve their test scores.

Testing Remains Mandatory for Most

Without having to agree with one side or the other, the reality is that most accredited universities offering four year degrees are a long way away from dismissing the SAT or ACT.

While the National Center for Fair and Open Testing (FairTest) cites 900 schools that “do not use ACT/SAT scores to admit substantial numbers of students into bachelor-degree programs,” 75% are for-profit, focused trade open admission or two year certificate schools.

After excluding these types of colleges (and those that require a college entrance exam for all but the highest performing students), only a small number of schools on this list —about 25%— prove to be true test-optional institutions for academic degree-seeking students.

Clearly, there is no perfect college entrance schema. Some campuses and students may benefit from test optional opportunities, but in most cases, the SAT, ACT and other college entrance exams appear to be lingering, particularly for accredited four year universities.

Students and families save some serious cash when students complete courses at a local community college first and skip the stress of preparing for the SAT altogether. (In most cases, four year colleges do not require college entrance exams from transfer students.)

Stay tuned for our next educational installment!